Relaunching a website is scary. A lot can go wrong.

The SEO and organic traffic portion of a website relaunch is often the scariest for the marketing department. There’s a lot to do, and not a lot of clarity on how to do it.

Are you a project manager, director of marketing or online marketing manager tasked with this challenge?

Here are my top 10 pointers for you on how to approach these projects, written by an SEO that was one a full-time director of marketing (I know the struggle).

1. Know Your Numbers and Your Goals

Before your first conversation with the SEO team or consultant, you need to know your top-level numbers and goals for this project.

These are the most common and helpful questions to answer for the SEO team:

What often happens with website relaunches and redesigns is that the designers have one opinion, the UX team another, the development team a third, and on and on for marketing, content, SEO, PPC, CRO, etc.

Is your relaunch’s #1 goal to make a prettier site? A faster site? A site that earns more organic traffic? There are multiple goals but they should be clearly prioritized.

When you as a marketing manager have to make a decision when SEO and design are on opposite sides of the table, which goal do you prioritize?

3. SEO Relaunches are an Art and a Science

There’s a lot of technical SEO elements that are part of a website relaunch.

There are some critical elements that are part of any SEO relaunch project that can cripple your site. There are also dozens of nuances that are small on their own, but add up to be significant.

The science part is ensuring all the technical SEO aspects are perfectly aligned.

Then comes the art part. If you’re making content changes during a relaunch, it’ll take some human decision making to decide what stays, what goes, what merges, and what gets prioritized (backed by data of course).

Likewise, when changing the architecture of your site, there are best practices to a degree, but also your own perception on what makes sense and what doesn’t.

These are just a sliver of the decisions to make, and it take a whole team.

As shown in the recent post on SEO relaunch case studies, seemingly minor things can make your site sink like a rock post-launch.

Just one misconfiguration of one critical element – such as the robots.txt, noindex tags, or rel=canonical elements – can tank your site for weeks until detected.

It shouldn’t be the case that so much can go wrong in organic search from so little, but it’s the way things are.

Sometimes Google will give you the benefit of the doubt, or ignore some directives, but some are absolute.

A good way to value how much this project is worth to you is to multiple the revenue from organic traffic for anywhere from 9 days to 6 weeks by 30%. The resulting number is a good ballpark figure for how much you could lose from a failed project. I put together a quick lost revenue calculator here to see for yourself.

“An ounce of prevention is worth a pound of cure.”  – Benjamin Franklin

Good ole’ Ben said it best, hundreds of years before the first website.

With so many teams, ideas, and tasks happening at the same time, preparation is everything.

Look, with such a big project, a lot is on the line.

So get out those spreadsheets, those Asana boards, those checklists, and strap in for a fun ride!

6. Create a General Timeline Based on Needs

Having a timeline is critical.

The SEO team should be engaged 30-60 days out for small sites, and 6 months to a year out for large sites.

We put together a waterfall timeline for all projects, showing parallel processes and dependencies: 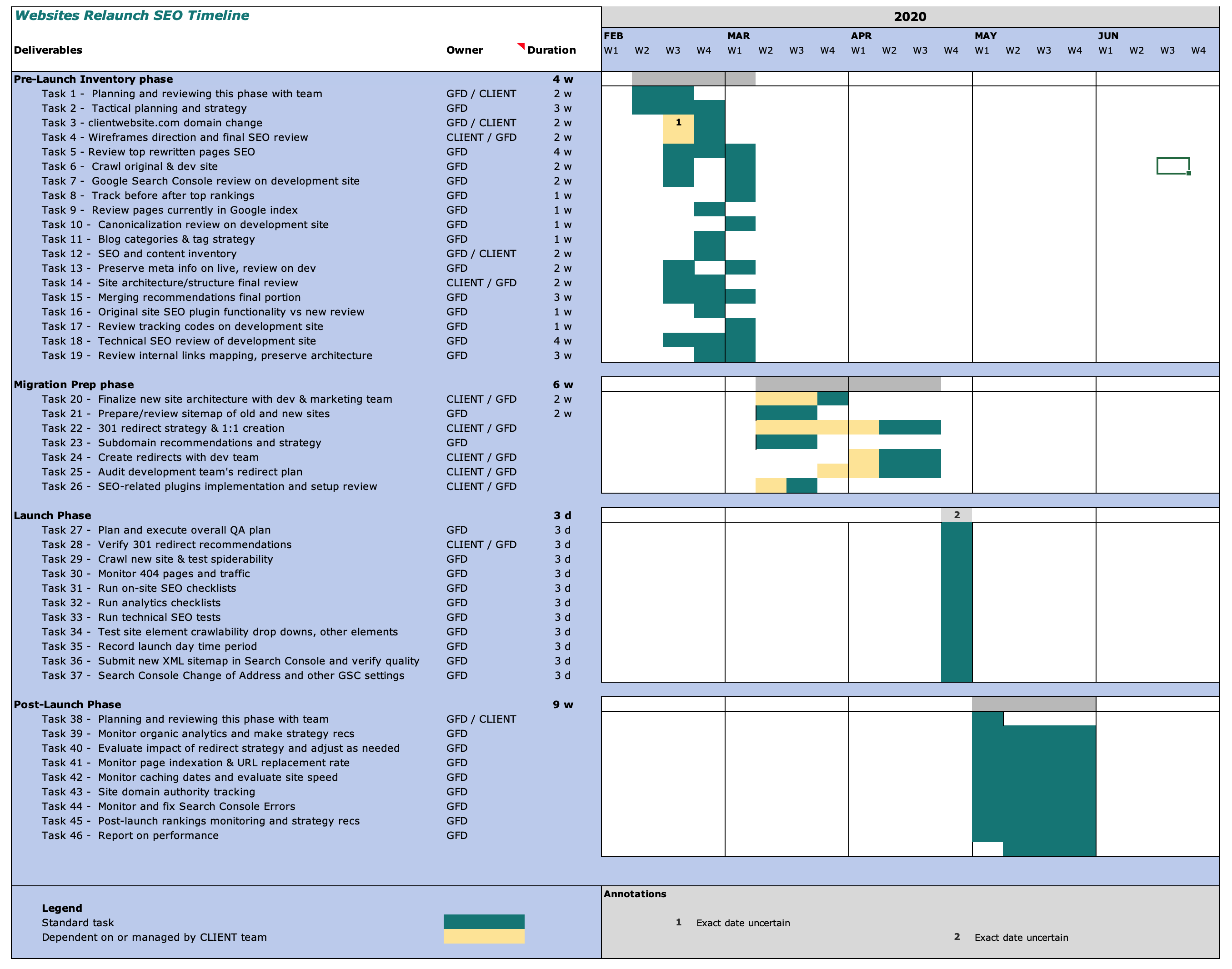 As with many website developments and digital marketing projects, things get moved all the time because the nature of the project is so ethereal. We’re not building cathedrals here. Just digital ones.

If your timeline is for a 4-month project and it gets delayed repeatedly throughout the process, your SEO team may be unavailable or have to charge more for the extra delays, so make the plan as concrete as possible, and based on real needs.

It can be annoying to loop in all the teams on email in every conversation, but with task management systems like Asana or communication platforms like Slack, your teams can have visibility in what the others are discussing.

This is pretty powerful.

As one example, my SEO team only got wind of a product page redesign that UX and design had agreed upon weeks after it was decided. But they left out key modules on the page that would impact SEO. They had to make design adjustments, which delayed the project an extra week.

Like everything in business and life, communicate early and often.

8. Involve Teams as Early as Possible

Similar to above, it’s key to involve all the critical teams as early as possible in the project.

If a large site is relaunching in two weeks, that’s not the time to invite the SEO team to review the project before launch.

That’s asking for a disaster.

A lot of projects overlap between teams, and there are tons of dependencies. Make sure that everyone knows what’s happening if it even remotely affects their work.

It’s likely everyone involved is also working on their standard monthly projects in addition to this one-time project. So make sure everyone has enough time to prepare, and it’ll be happily ever after.

It’s good to safeguard your company’s private information, such as financial data and proprietary information.

It’s very unlikely that showing your analytics to an SEO before the contract is signed means the SEO will go give it to your competitor and they’ll make millions.

It’s more likely that there are lots of nuances that can’t be seen from 3rd party tools that can affect the whole project.

10. Keep the HiPPOs in the Loop

Are there executives and higher-ups (HiPPOs – highest paid person in the office) on the sideline watching the project from afar?

They may only come out of the woodwork after the fact, with opinions when it’s too late.

Their opinions can derail the project when it’s too late. You know your internal politics and processes, but from my experience, there have been a few scenarios when the ultimate decision-maker (CEO) got involved too late, and the teams had to scramble.

Bonus: It Ain’t Over till it’s Over

After a website relaunch, you’re allowed to pop the champagne for 5 minutes before it’s time to get back to work.

The 2nd most important portion, besides the preparation phase, is the post-launch phase where we’re monitoring the traffic in real-time.

Google search is a black box. All of our best practices are based on thousands of SEOs testing what works and what doesn’t. But there’s still so much that’s unknown.

What may work for one site perfectly may not for another.

So after a site launches it’s critical to be flexible and make the adjustments needed based on how organic rankings and traffic are flowing.

Once you start hitting some growth after a few months post-launch, then you can celebrate.

And take your much-needed vacation.

Here is a sample process schedule for executing a full migration or relaunch. Let me know if you’d like to see a template of this.

Founder & Consultant
Joe Robison is the founder of Green Flag Digital. He founded the agency in 2015 and has been heads-down scaling content marketing and SEO services for clients ever since. He is an occasional surfer, fledgling yogi, and sucker for organized travel tours.

Selected articles for you 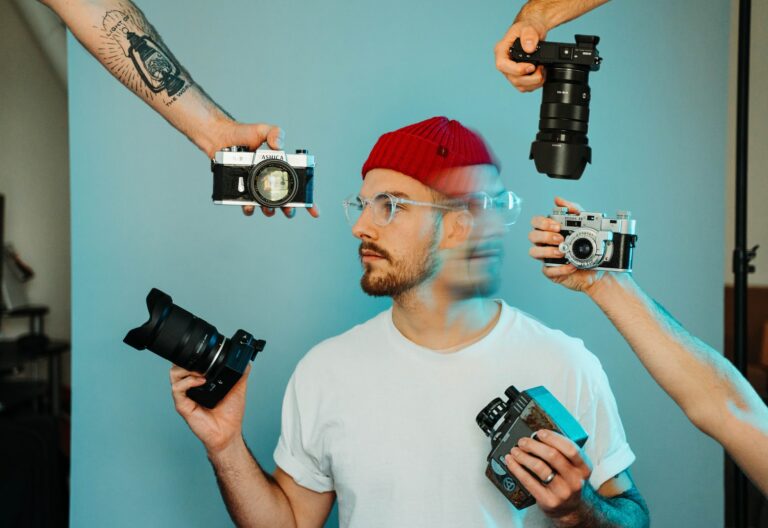 Image Link Building: Examples, Ideas and How To

I've been seeing a few example recently of sites clearly stating that people can use their images, with attribution. It's…

Get a twice-monthly digest of great articles 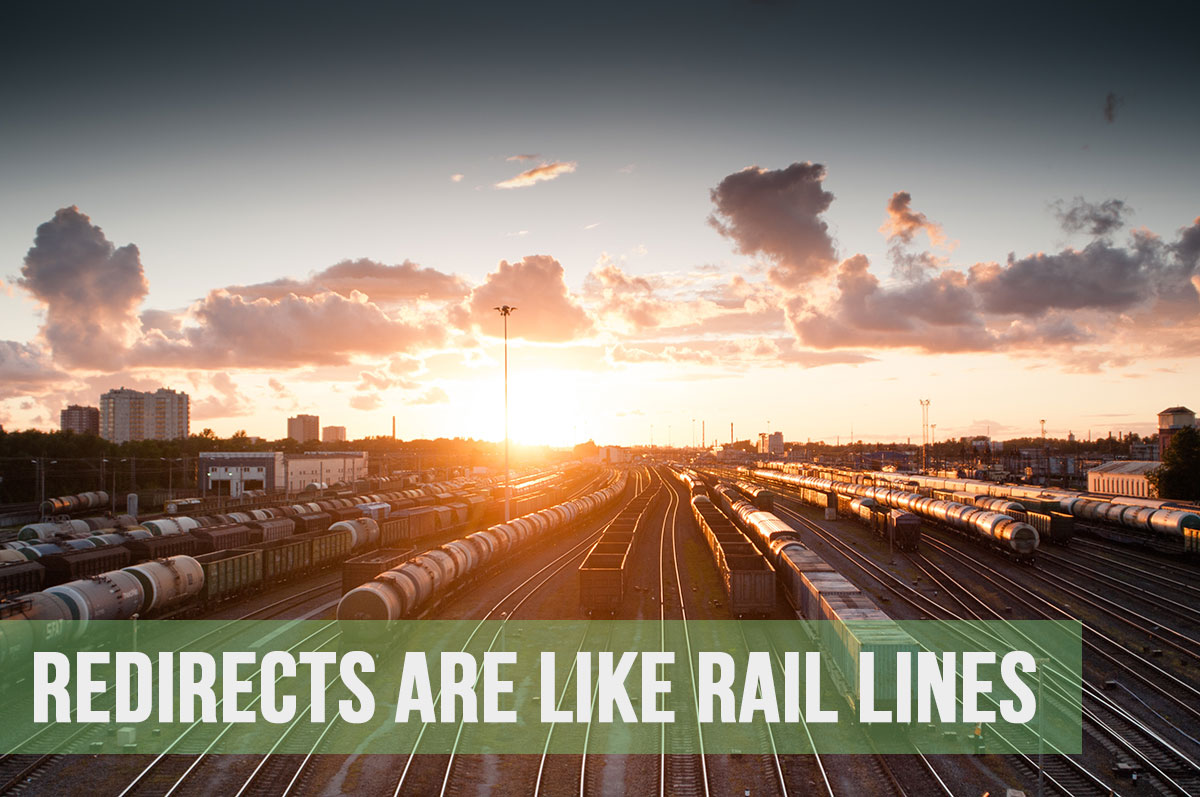 Redesigning your website is a gargantuan task. Too often, the project manager will consult an SEO specialist a few days before…

Get new content marketing and SEO ideas and updates in your inbox every few weeks.